The Alexander Technique teaches you how to reduce tension and effort and improve posture, coordination, and breathing by changing how you use your mind and body, allowing you to enjoy increased freedom and ease in activity. 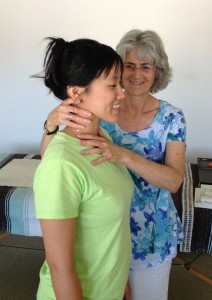 As you practice any activity, such as playing a musical instrument or driving a car, you repeat and perfect muscular patterns that become automatic habits. Often these habits involve too much tension or postural imbalances that cause unnecessary strain, tight neck and back muscles, collapsed posture, stiffness or lack of mobility. Habits like this, repeated over time, can interfere with performance and cause recurrent or chronic problems. Addressing this problem goes deeper than correcting technical faults to changing the basic organization of coordination.

Inefficient coordination and unnecessary tension can be caused by something you are doing:

The Alexander Technique can help you change on the most basic level what you are doing with your body while engaging in any activity. You can learn to stop inefficient movement patterns and restore poise and ease through intentional thinking. 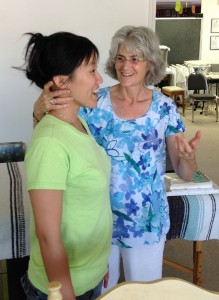 F. M. Alexander (1869-1955) as a young Shakespearean actor in Australia developed chronic laryngitis while performing. Determined to restore the use of his voice, he carefully watched himself in a mirror while speaking, and observed that excess muscular tension accounted for his vocal problem. As he sought to solve his vocal problems, he discovered a principle that profoundly influences coordination and well-being: when neck tension is reduced, the head no longer compresses the spine and the spine is free to lengthen and the back to widen.

Alexander found that preventing his habitual response of excess tension allowed a beneficial change in his basic coordination to happen. Gradually, Alexander learned to restore his own natural capacity for ease, solved his vocal problems, and evolved a unique teaching method that encourages the body to work more efficiently as an integrated whole.

In practical terms, the Alexander Technique focuses on the head, neck and back relationship as the key to bringing about greater ease and economy of movement. If the head and neck are in a state of dynamic balance and the back is expanding and lengthening, there is a resulting poise of the head, release of the throat, mobility of the ribs in breathing, freedom of the joints, elasticity and steadiness of the torso, which facilitate performance. 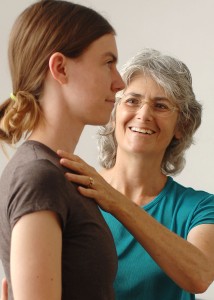 Alexander developed a specific method for changing habits of use. The student learns to think in a new way about movement: to mentally prevent the old habits and allow the new coordination – neck to be free, head to go forward and up, back to lengthen and widen – while the teacher guides the student to bring about the improvement associated with those conditions. The student gradually develops the skill to recognize and prevent habits of misuse and to coordinate her/himself in a healthier manner while engaging in simple activities – such as sitting and standing – or complex skills such as working at a computer, playing the violin, or practicing martial arts. 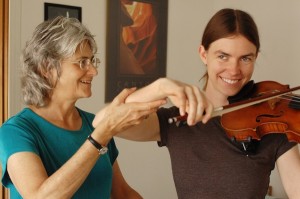 While the ideas behind the Alexander Technique are simple, learning to change deeply ingrained habits does not happen overnight. In lessons, you will be learning a new skill: how to change a habit. Just as in learning any new skill, we cannot predict exactly how long that will take, because everyone is unique. While workshops and classes can introduce the principles of the Technique, the most effective way to learn these new skills is a series of private lessons that insure individualized instruction geared to your habits and learning process. Generally, a recommended series is 20-30 private lessons; however, the instructor cannot assess your habits and learning process without working with you.

Want to learn more?
Click here for more information about how to change an unproductive habit using the Alexander Technique.